For the past two days, Kit McConnell, Sports Director of the International Olympic Committee, has been present at the World Judo Championships in Tashkent. This visit is not trivial as it perfectly illustrates the excellent relationship between the IOC and the IJF and above all it allows Kit McConnell to get a clearer idea of ​​the organization of such an event. On the morning of the third day of competition, he could be seen around the warm-up room, where, accompanied by Larisa Kiss, IJF International Relations Manager, he was able to meet the Ukrainian team, as well as the International Refugee Team.

“I am incredibly impressed, really. After the two years of Covid and restrictions that we all had to go through, to see again a global competition being organized normally is so great. Again, this is impressive, but not only that, I do like the spirit of judo. I can feel it here. It’s a truly familial spirit.

The level of competition and the look and feel of the venue are outstanding. It clearly shows two things: the true global nature of judo and its values. You just have to see the number of flags or the names of the countries to understand that the sport is present all over the world and you have to be here to feel that the judo values ​​are everywhere.

We have had a strong relationship with the IJF for many years. There is so much professionalism within the organization. The capacity of the IJF to deliver events is incredible. I can say that we have a very open connection with the federation, based on trust and respect and it works both ways.” 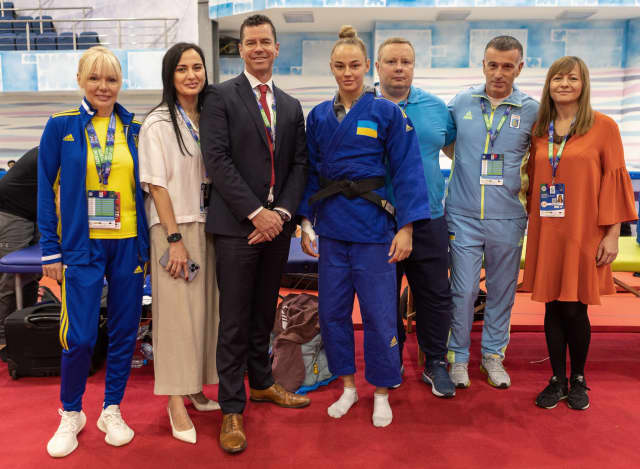 While walking through the warm-up area, Kit McConnell had the honor of meeting and speaking with double world champion and Olympic medallist, Daria Bilodid, as well as with the coaches.

“Today I was especially happy to meet the Ukrainian team. Since the start of the invasion and the conflict, we have worked a lot with NOCs and international federations so that the athletes can be supported as much as possible. Even if the athletes can train outside of the country, they all have families back at home, so it’s never perfect, but we can offer security and a place to train. Unfortunately, we can’t solve everything. In that sense, what the IJF has been doing is outstanding. I believe that it is the real meaning of international sport.” 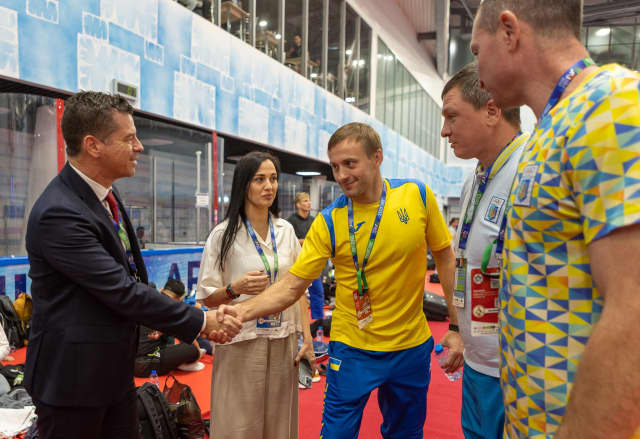 During his talk with the Ukrainian athletes and coaches, the latter explained the support they receive from the IJF, which allows them to be present in Tashkent with 9 men and 4 women, who are competing throughout the week. “We received a lot of support from the IJF and we are really grateful” said the coaches, before adding, “It helped us to keep training and solve all the problems.” Daria Bilodid also said to Kit McConnell, “I am now training in Spain, in Valencia. All together we have 20 competitors. I could really concentrate on my change of category since I jumped from -48 to -57kg. The support we received from the international federation and the IOC are outstanding.”

A little later, Mr McConnell met the International Refugee Team, “Since Rio 2016, the IOC has been very active in the support of refugee athletes. We had a team at those Games as well as in Tokyo last year and we will have one again in Paris 2024. We have IOC members representing the refugee community, as well as refugees in our athletes’ commission. 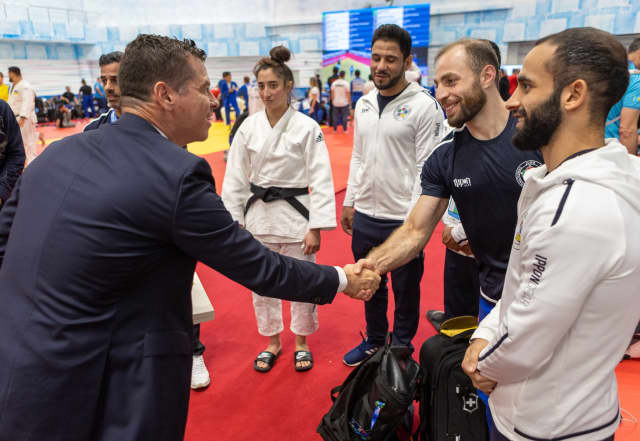 Displaced people have always been present in our societies but it has become a real problem in our modern society. There are so many human stories behind our sporting lives. We can offer them a normal sporting environment. They can’t represent their home country and can’t represent their host country, so we had to find solutions. It’s very important because it offers us an opportunity to raise awareness of the refugee situation around the globe. The more we can do the better it is for everyone. Once again, the IJF has done an amazing job to help refugees and it is great to see such a big team here. 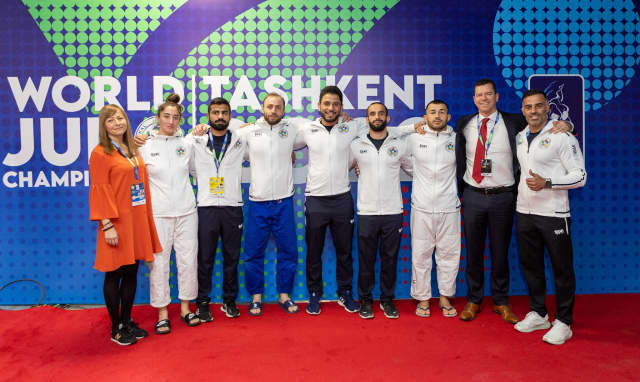 Kit McConnell continued his visit and discovery of the World Championships. In his own words, everything he saw was outstanding and this is always good to hear.