Although there are plenty of races run on golf courses across the state, it is unlikely that anyone would win both high school golf and cross country events on the same golf course.

The odds aren’t very good either that an athlete will capture an MHSAA Finals championship in both sports.

The chances must be even slimmer still for that athlete’s teams to sweep both titles in the same season.

Meet Grace Slocum, a golf and cross country standout at Traverse City St. Francis High School. Don’t bet against her work ethic and talent. Her coaches say both are second to none.

There might not be a need to do any speculating. Her coaches and teammates can’t wait to see what she accomplishes yet this season and throughout her career. Slocum is only a sophomore.

Her school is undergoing some re-modeling right now. A bigger trophy case should perhaps be under consideration.

She’s been accumulating hardware at golf events away from her high school team for some time. Now, she’s winning high school championships. This week, she won a golf Regional title and led her team to a second-place finish qualifying the Glads for the Lower Peninsula Division 4 Final to be played Oct. 14-15 at Grand Valley State University. St. Francis shot a 400 to trail only champion Harbor Springs – one of the strongest golf programs in the state – which finished with a 383.

Slocum finished ninth at the Finals last year as a freshman, and the Glads wound up 13th. Craig Ardery, who is in his 20th season as the St. Francis girls golf coach, is hoping his team cracks the top 10 this time. 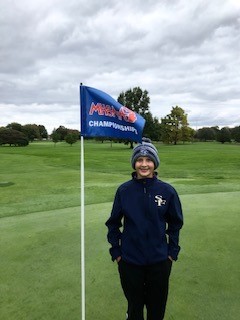 When the Golf Finals are over, veteran St. Francis cross country coach Julie Duffing will have Slocum dedicated to running – and the Glads have their eyes on a team championship again after winning LPD3 titles in 2015 and 2016. They were third last year and have ridden consecutive conference and Regional successes to the Finals every year since 2015 – the year Duffing became head coach.

That was also the year her daughter, Katelyn, was a freshman on the Glads team. Julie Duffing’s role didn’t change a whole lot with the new title. Prior to joining St. Francis as an assistant track coach in 2013, she had coached at Kingsley for 17 years. The Stags regularly finished among the top 10 in boys and girls cross country during her tenure.

The last year the Glads girls did not qualify as a team for the Finals was 2014 – also the year Holly Bullough won the first of her two individual Finals championships.

Today, the Glads are still feeling some sting from missing out on second place last year by just a few points to Kent City.

“The plan was to come back with a vengeance this year,” said Duffing, who enjoyed a prep running career herself at Tawas and competed in track & field and cross country at Saginaw Valley State University. “Last year being third, and only two points separated second and third, was a little bitter.”

Slocum’s twin brother, Josh, also plays golf for the Glads and runs cross country. He’s recovering from a summer injury but ran a personal record last week in his first race of the season. He was the top finisher too for the team ranked second in LPD3.

The St. Francis girls, ranked number one in LPD3, will soon have Slocum dedicated to cross country. She’ll be with the Glads for their last three scheduled meets including the Regional in East Jordan and the Final on Nov. 5 at Michigan International Speedway.

Hart won the LPD3 girls championship last year and is currently ranked fourth. The Glads have run against the Pirates twice this season, winning one of the matchups.

Rhein is the only senior this year among the six returnees. Add stellar freshman Paige Ritchie, and the Glads are ready to contend. Other members of the team looking to compete are senior Cora Garrey, junior Margot Haggerty, sophomores Katie Harrand and Maya Padisak, and freshmen Lucy Noggle, Olivia Padisak and Sarah Trojanowski.

“We did beat Hart at Benzie, and everybody was super excited about that,” Duffing noted. “And then we lost to them this last weekend.

“We didn’t have Grace this last weekend,” she continued. “We just didn’t have a great weekend.”

The loss to Hart can only help the Glads as they prepare for the postseason.

“I told the girls it’s OK. … Let’s have our bad races now,” Duffing said. “Let’s get them out now, and then we don’t have to worry about having another one.” 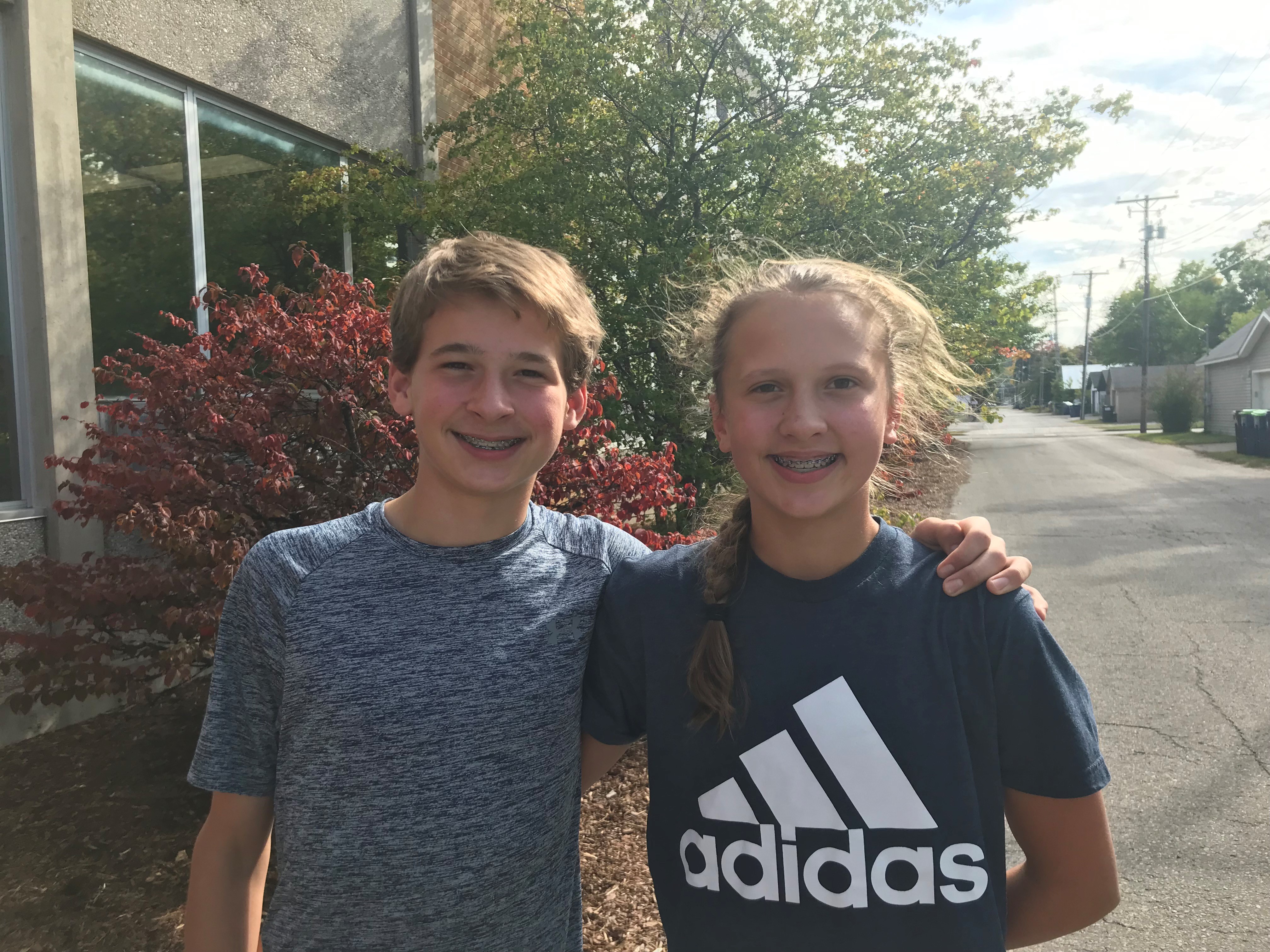 Slocum, whose favorite sport is golf, considered focusing exclusively on golf this fall. The pressures of two sports at one time with homework demands and school absences were weighing on her as the fall season began.

Duffing was prepared as the possibility was contemplated, having known Slocum for some time through her daughter’s close friendship and all the years they played hockey together. At the top of Duffing’s mind was – and is – Slocum’s happiness.

Duffing came up with a convenient plan for Slocum to follow and participate in cross country. The running Glads were thrilled with it. As a smaller school, the coach knew the importance of flexibility for student-athletes.

“I just looked at her and said, ‘You have a spot on the team no matter what,'” Duffing said. “‘You come when you can – we’ll work with you.’

“‘You don’t golf on Saturdays,'” Duffing recalled telling Slocum. “‘So race on Saturdays, and when you can get some runs in (during) the week, great.’

Knowing Slocum would be in the Glads’ top five whether she practiced regularly or not, the team set its sights on repeating as conference champs and moving through the Regional to the Final.

“I think our job with Grace was to keep the pressure off her and keep her happy,” Duffing noted. “I want her smiling, and I want her to have fun.

“It’s a team sport with a lot of really high goals, and she is part of those,” Duffing continued. “I just want her to be a part of it.”

The two worked out a schedule for training that focused on Sunday running as all the other pieces fell into place. They lost a few Saturdays so Slocum could golf on the courses where the Regional and Final were scheduled.

Slocum will wrap up her golf season next Friday and Saturday in Allendale. She’ll then run Oct. 22 in the Northern Michigan Cross Country Championship at Gaylord – on a golf course at the Otsego Club – and then is expected to help the Glads at the Regional on Oct. 29 before going after the Finals championship.

As she moves through her high school career, Slocum will likely shatter every single golf record at her school — if she hasn’t already. She’s been the team’s top golfer since joining the program a year ago. Before her victory Tuesday, only one other St. Francis golfer won a girls golf Regional title.

“She’s the number one golfer in my history of girls golf,” Ardery said. “She’s hitting a bar that will be difficult for other golfers to meet.

“The girls before her know about her, and they are very pleased to have their records broken,” he continued. “It’s pretty impressive what she’s been able to do.”

Slocum is nearing the mid-point of her high school career. It would be difficult to bet against her possibly winning golf and cross country races on the same course – or team and individual Finals championships during the same season.

“She has the lowest scoring average of any golfer I’ve coached, and she’s only a sophomore,” Ardery said. “It’s really early in the story.”