Decathlon, a French brand committed to providing affordable gear that gets people outdoors, proves that great gear doesn’t have to have a shockingly high price tag. While manufacturers of premium cycling bibs, which often retail for between $200 and $300, claim that they can’t design a drop seat feature into their “affordable” women’s bibs, Decathlon offers that feature in the Van Rysel. For $59.

Debunking the popular quip “you get what you pay for,” Decathlon introduces their women’s Van Rysel cycling bib with a drop seat and mesh tank bib that’s made for long rides. At $59, they’re about the most affordable cycling bib you can buy that’s also worth wearing. Decathlon, a ten billion-dollar company and the largest sports retailer in the world, has some pretty solid economy of scale, as well as a committed vision to “sustainably bring the power of sport to everyone, everywhere by designing the best products at the best prices, innovating for quality and performance so everyone can play.” They’re currently fulfilling that vision across 80 sports, including cycling, in at least 28 countries.

Even before I put them on, I liked the feel of Decathlon’s Van Rysel bibs. The fabric is light with responsive stretch. The bibs have a lot of panels. Sometimes that means too many itchy seams that can cause pressure points. When I did put these bibs on, they felt supportive, body-hugging, and appropriately compressive, but not confining or uncomfortable in any way. 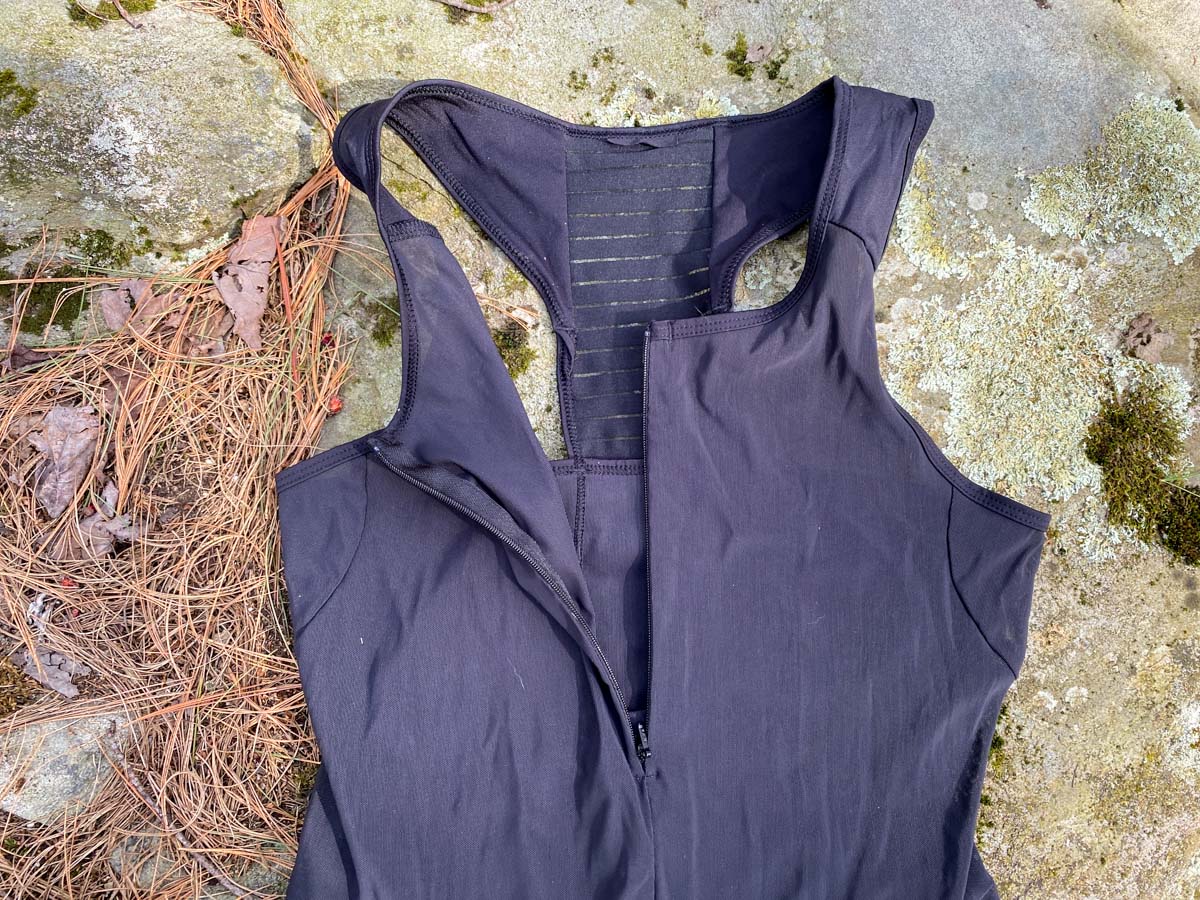 One of the unique design features of these bibs is that they come up relatively high on the sides, and they have a full mesh tank top. The top was flattering and it wasn’t overly hot. The broad shoulder straps have stretchy fabric, not mesh. They lay flat during rides and never bunched or rolled. 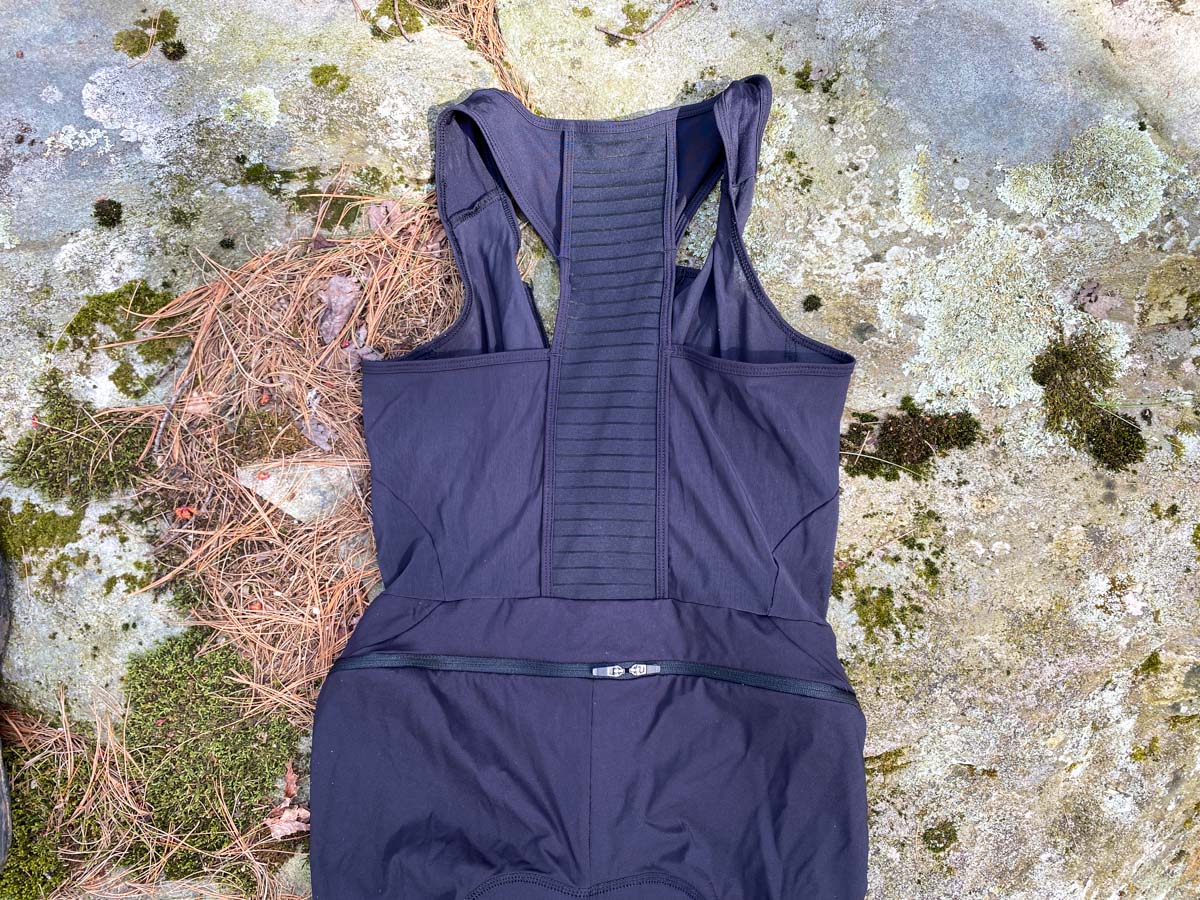 The back of the mesh top has a vented reinforced panel that runs from the neckline between the shoulders to the lower back to give the bibs structure and support. That panel enables the zippered drop seat. 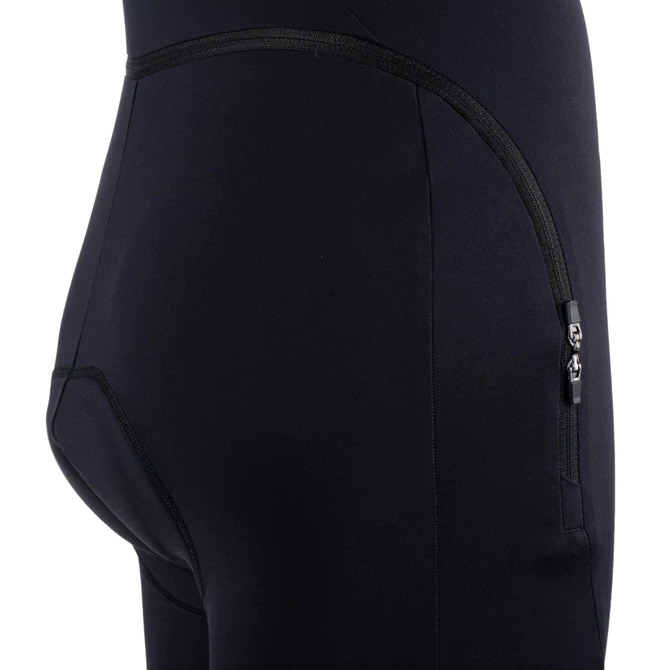 Narrow locking zippers curve from mid-thigh to the lower back meeting in the middle. When nature calls, unzip, and you can drop your shorts and find relief. It’s a design similar to that used by Gorewear, Gore-Tex’s in-house sportswear brand, in their women’s cycling bibs. 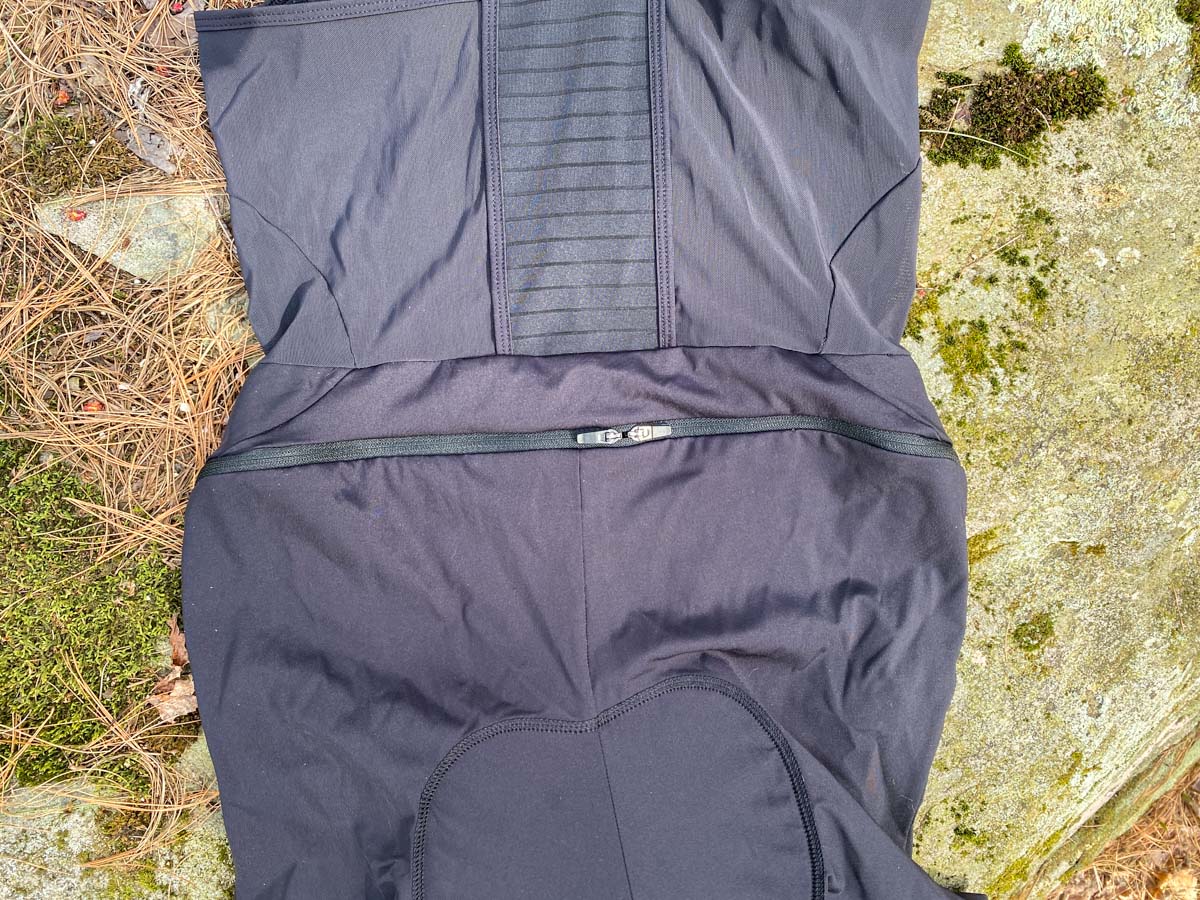 The tank part of the bibs didn’t ride up when the shorts are unzipped thanks to the structural panel on the spine. This bib was easy to get zipped so I could take care of business then be on my way. The locking zippers stayed closed while I was riding, and I forgot about the dropseat zippers until I needed them.

A narrow locking zipper that stretched from just below my bra band to the top of the scoop neck provides easy entry to put the bibs on. If I didn’t want any extra chest compression, I wore the bibs with it open or partially open. Thanks to the tank styling, there was no figuring out where the shoulder straps should lay in relation to the breasts, and the shoulder straps didn’t roll during a ride, which I’ve had happen in quite a few pricier bibs. Because the top is a full tank, there were no awkward plastic clips connecting the shoulder straps mid-chest. The tank ends in a v-shaped lycra panel that felt good on my belly, and which gave the shorts a flattering cut.

Decathlon opted out of silicone gripper inside the leg cuff, but this bib didn’t need it. I rode in the Van Rysel several days a week for more than a month, and they never rode up.

Decathlon sews all the tags for the Van Reisel onto an inch-wide strip of fabric at the back neck of the bibs, so I could cut tags off without potentially cutting too close and opening up a seam or not cutting close enough and having an itchy fan of fabric tag ends. It’s a small detail, but one that shows that Decathlon set out to design great bib shorts, not just affordable bib shorts. 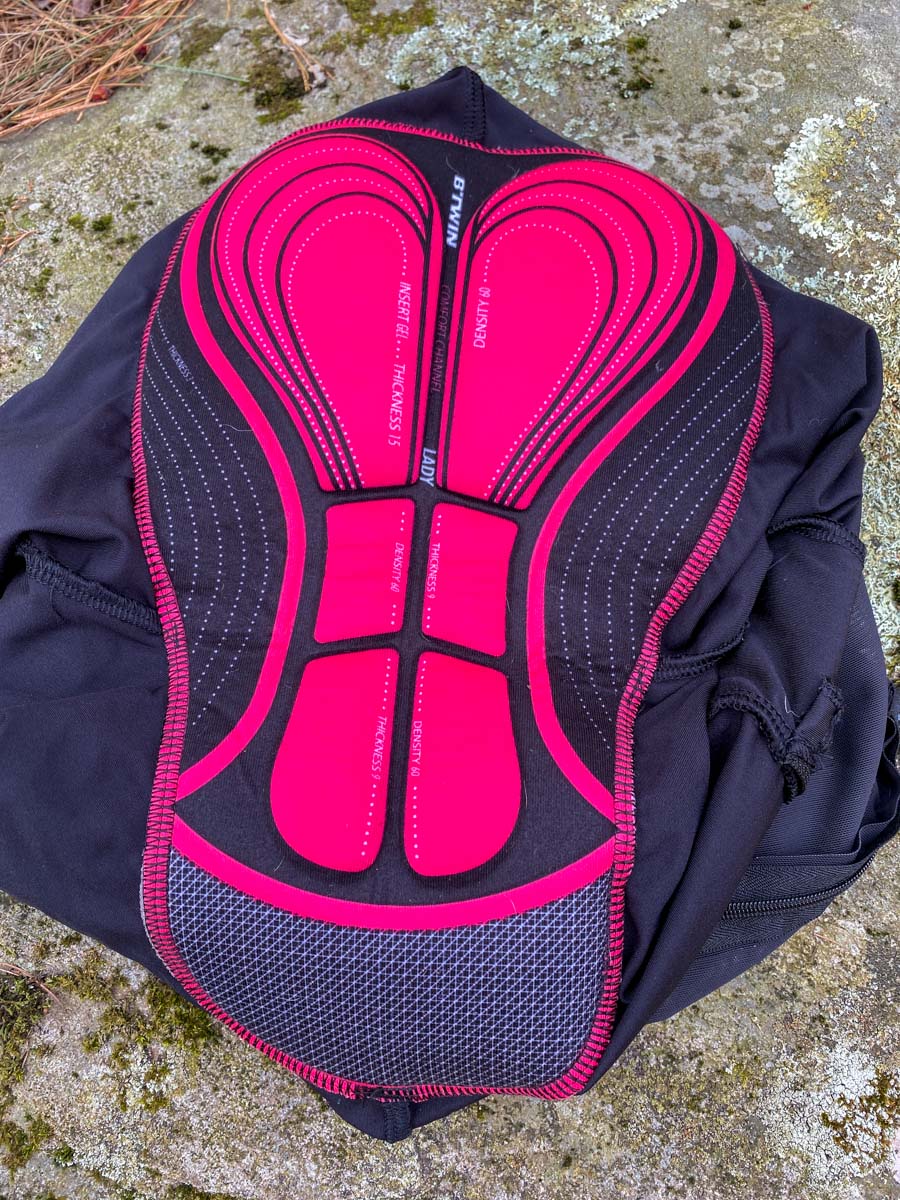 Possibly the most important feature of bibs or any cycling shorts is the chamois pad. That’s the reason riders buy cycling shorts. The best bibs have a highly engineered chamois pad. Decathlon’s pad is leagues ahead of any other chamois pad at this price point. The Van Rysel foam and gel pad has horizontal cutouts to help curves to match the shape of a pelvis without bunchy fabric. A vertical channel down the middle relieves pressure. 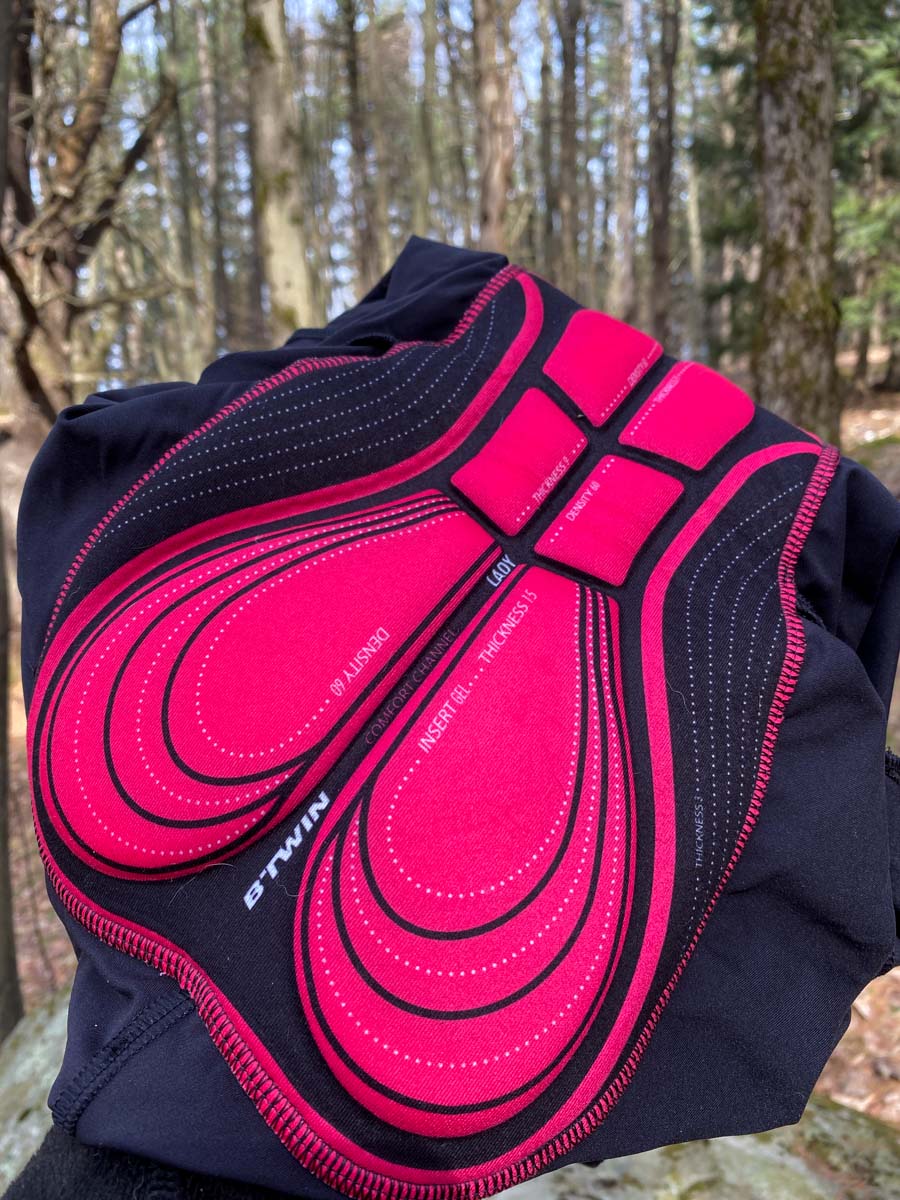 The most padded part of the chamois is the shape of a saddle, but a thin layer of padding exponents out of the narrowest zone. The chamois is sewn into the bibs with flatlock seams to prevent chafing, and the seams are well away from where you might sit on them. Under the crotch of the bibs under the chamois pad, horizontal and vertical seams intersect. I was able to feel that on longer rides, although many other reviewers did not. Everything about the chamois construction and sewing is great and while this chamois didn’t provide as much support as the most elite chamois, it came damn close. While neither chamois nor shorts are treated with antibacterial, the Van Rysel didn’t get as stinky as fast as some other bib shorts I’ve tested. I was usually able to get a couple of rides out of it before washing depending on the weather and the length of the rides. 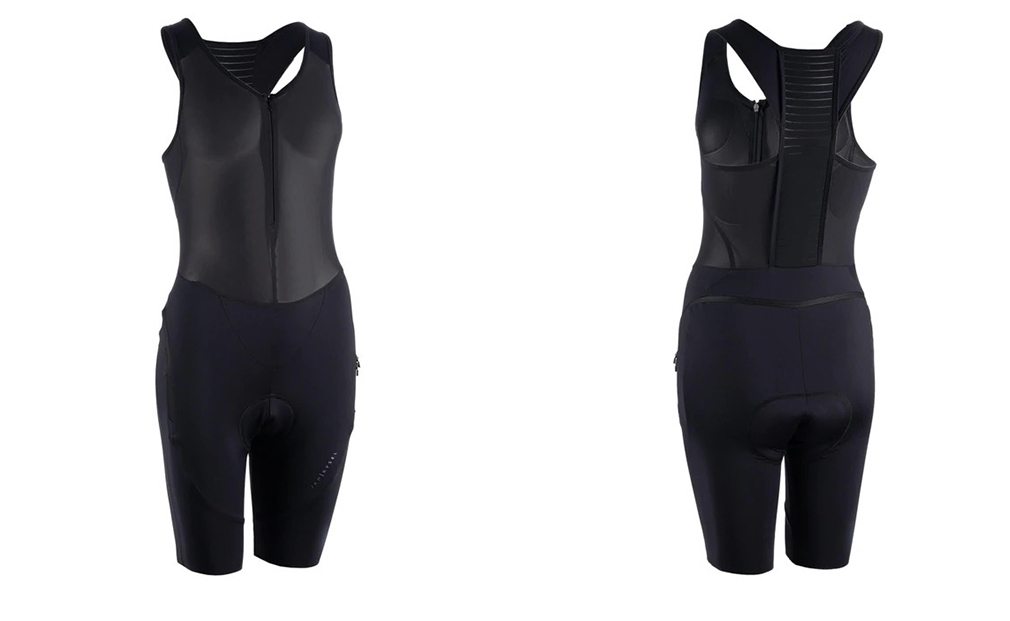 The bibs look great and feel great. Decathlon’s body-hugging “Pro Fit” fits snugly, as it’s built to conform to your body, and there’s a lot of give. As a cyclist with narrow hips, broad shoulders, and boobs, I wondered if the size M would fit my bottom half and my top half, and it did. But the stretchy top wasn’t baggy on testers with a smaller frame.

It’s impossible to know how well this chamois will last without riding it for a full season or more so stay tuned while we see how long it takes to wear it out. And remember, if you ride regularly, it’s best to have at least two chamois and to rotate them. And, keep an eye on pro tour Team Cofidis in the peloton at this year’s Grand Tours and biggest races. They’ll be rocking Decathlon’s Van Rysel kits. The bib runs true to size and is available in 2XS-XL.

In short: Decathlon’s Van Rysel is a supportive, comfortable, and affordable cycling bib for women with a drop seat function that makes it easy to take a pee break without stripping.