ADRIAN – A couple of years ago it would have been easy to image Brady McKelvey scoring a last-second shot for Adrian Lenawee Christian to win a basketball game or for him to find the back of the net with a game-winning goal in soccer.

But fast forward to today and McKelvey might be more likely to kick a game-winning field goal for the No. 2-ranked Cougars 8-player football team.

“I watched football of course, but I never played it until last year,” McKelvey said. “It’s interesting. It’s been a lot of fun. I’m glad Coach (Bill) Wilharms asked us to try out.”

McKelvey is a two-sport athlete in the fall, playing for both the Lenawee Christian soccer and football teams. He’s played on MHSAA championship teams in both sports. Last week McKelvey reached rare territory when he kicked his 100th career extra point – the state record for 8-player football.

“We were never big football players,” McKelvey said, referring to him and his brother, Jacob, now a student at the University of Michigan. “We just always had a soccer ball in our hands.”

Wilharms is the strength and conditioning coach and varsity football coach at Lenawee Christian, which has grown into an 8-player powerhouse, winning Division 1 championships in the 2020 and 2021 seasons. Brady and Jacob McKelvey were working out at the LCS facilities two springs ago when Wilharms asked if they wanted to try out kicking for the football team.

“I always wondered what it would be like to kick a football,” Brady McKelvey said. “I’ve always wanted to, but never had the opportunity. We were excited to try it out.”

Both came out for the team last season and were coached by Casey Opsal, a former Hudson kicker and now a Lenawee County sheriff’s deputy who is one of Wilharms’ assistants. With Opsal’s guidance, Jacob and Brady blossomed into outstanding kickers.

“He’s been the person who has taught me everything I know about it,” McKelvey said. “He helped me improve a lot.”

McKelvey has never attended a football camp or had a lesson in kicking a football from anyone outside of the LCS staff. Yet, his statistics are nothing short of amazing.

Last season, McKelvey had a string of 52 consecutive extra points at one point and finished the season making 59-of-61 attempts. He has a current streak of 23 straight makes heading into this week’s game and is 44-for-45 overall this year. In two seasons, that makes him 103-for-106. He kicked his first field goal earlier this season, giving him 106 career kicking points.

Twice in his career he’s kicked 10 extra points in a game. This year he’s hit at least eight PATs four straight weeks. He also averages about 45 yards per kickoff.

Wilharms said he’s happy McKelvey decided to try his leg at football and said the senior is still learning nuances of football, such as where to place the ball on kickoffs. 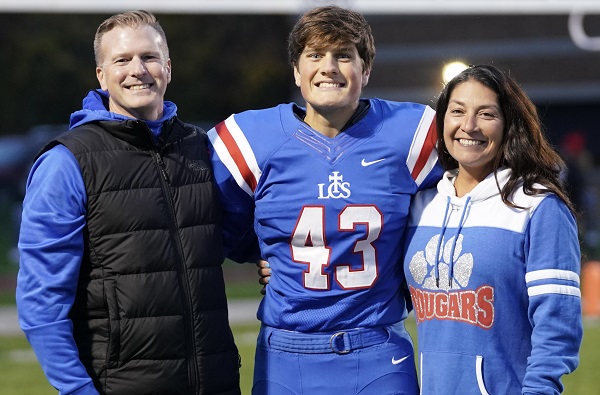 “He is a good athlete,” Wilharms said. “His PATs are consistent. We are definitely glad to have him on the team.”

Brady and Jacob shared duties last season, although by the end of the season Jacob was kicking off and Brady was handling the bulk of the extra points.

“At first, one of us would go out and kick and the next time the other one would go out there,” McKelvey said. “Toward the end of the season, I was better at extra points, and he was better at kicking off. It is cool to be on a team that scores a lot because you get to kick a lot.”

LCS has no trouble scoring. The Cougars are 6-1 and average 49.8 points per game.

Soccer continues to be McKelvey’s favorite sport. The Cougars are having a solid season on the pitch as well, and he is a big part of that team’s success too.

Cougars soccer coach Nathan Sharpe said McKelvey is a team leader. He has three goals and three assists this fall. “He’s a captain and a key player on our team,” Sharpe said.

“It’s surprisingly different,” he said. “A soccer ball is a lot bigger. You have more room to hit it. You want to lean over and try and keep it towards the ground. A football you have to make a much different type of contact because you want to get it up into the air.

“The first time I kicked a football with no coaching, it was interesting. I had to try and completely switch how I was kicking.”

He’s learned the technique so much that this winter he is considering not playing basketball so he can go to football kicking camps. He’s hoping to become good enough to try out or walk-on to a football team in college.

“I didn’t really expect to be as consistent as I have been,” he said. “You watch college kickers, and even they miss sometimes. I work at it as much as I can. With soccer games, there are times I cannot go to football practice, but I try and get out there as much as I can.

“I think it would be awesome to kick in college,” he added. “I plan on going to some camps this winter. If I’m able to walk-on somewhere, that would be fine with me.”

Besides soccer, the McKelveys have a basketball background as well. Their dad Scott has coached boys and girls basketball in Lenawee County for years. He was recently hired as the boys varsity coach at Blissfield. The boys grew up being managers and hanging around the teams that Scott coached.

McKelvey is setting the bar high in the 8-player football record book. LCS still has two regular-season games remaining and is considered among the favorites to make a long postseason run – meaning he could push that extra point number a lot higher.

“I’m very happy I tried out for the team,” he said. “Being part of it is a lot of fun. The guys on the team have always treated me as part of the team. I really like being on the team. All the success we have makes it so much fun.”

Doug Donnelly has served as a sports and news reporter and city editor over 25 years, writing for the Daily Chief-Union in Upper Sandusky, Ohio from 1992-1995, the Monroe Evening News from 1995-2012 and the Adrian Daily Telegram since 2013. He’s also written a book on high school basketball in Monroe County and compiles record books for various schools in southeast Michigan. Email him at DougDonnelly@hotmail.com with story ideas for Jackson, Washtenaw, Hillsdale, Lenawee and Monroe counties.