A horse walks into a bar: US Grand National winner Hewick drinks a pint of GUINNESS in a pub with trainer Shark Hanlon as some fans compare the moment to Ginger McCain and Red Rum… but others claim the 7-year-old looks ‘terrified’

By Charlotte Daly For Mailonline

Recently US Grand National winner Hewick received a warm welcome as he ventured into his local pub on Monday evening.

Hewick made headlines across the world when he won the US Grand National his month. As a result, he was taken to The Pint Depot in County Carlow to celebrate.

The 7yo was brought into the local pub by trainer Shark Hanlon. He was also seen drinking a Guinness at the bar in Ireland before heading home.

Punters were shocked to see Hewick stroll through the door on Monday evening and took out their phones to record the moment.

Hanlon was heard shouting ‘can I get a pint of Guinness now?’ as he made his way to the bar with Hewick.

Hewick – who was bought for £800 – has won just under a quarter of a million pounds from his past three races.

He was on track to add to that before he unseated his rider when going over the last fence in the Kerry Grand National.

A win in Kerry would have added another £100,000 to his pot. However, Hanlon was still delighted with the 7yo for his performance at the American version of the Grand National.

Hewick won the race and picked up another £111,000 in prize money. Therefore, the notorious horse trainer decided to celebrate.

He took Hewick to his local pub, just moments away from Shark’s stables. He walked the US Grand National winner up to the bar and ordered a pint of Guinness.

Hanlon even let Hewick lick the top of his pint before raising his glass with the rest of the pub.

Some fans felt bringing Hewick into the pub was an iconic moment and one that drew similarities to what Ginger McCain did with the legendary Red Rum.

However, others were disgusted at Hanlon for bringing Hewick into the local boozer and allowing him to lick his pint. 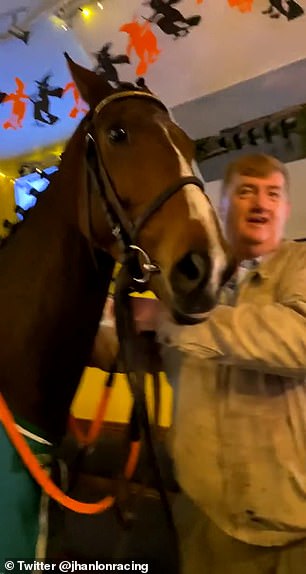 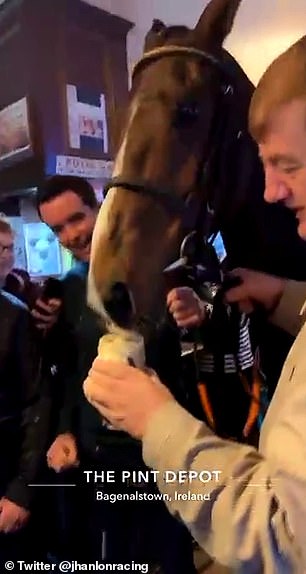 Those in favor of Hanlon’s decision said: ‘This adds to the many reasons why I love Ireland.’ Another added: ‘My kind of bar.’

One fan wrote: ‘I am actually crying’. While others joked: ‘A shark and a horse walked into a bar… which one drank the Guinness?’.

Another said: “The bartender goes, ‘why the long face?”.

However, some fans were less impressed. One Twitter user wrote: ‘The horse looks terrified WTF’. Another added: ‘That’s not safe’.